It has been brought to my attention that my article “A woman has the absolute right to voice her frustrations against a Prophet. Sit. Down.” has garnered ableist comments with which AJ anchor Sana Seed agreed. In addition to appreciating the opinion of a man who devalued those who are “mentally ill” and have “meltdowns,” Saeed also had this to say: 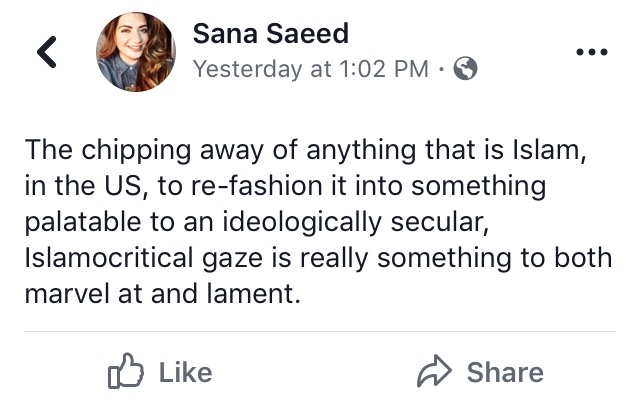 Her remark of course, is an example of colonialist Islam, which I’d defined earlier as Islam that is misogynist, anti-black, transphobic, disableist, and oppressive in ways specific to the regressive European colonial influence in the Middle East and South Asia. The root of Colonialist Islam is the belief that “Traditional islam” (or Colonialist Islam), as defined by self-described “traditionalists,” is not diverse in tradition, when history proves otherwise. The term shouldn’t erase or dismiss deeply-rooted pre-colonial oppressions, but challenge the erasure of varied tradition in favor of colonialism’s superficial unification under, for example, anti-woman and anti-LGBT laws. A symptom of colonialist Islam is the belief that either colonialism is the only oppression that exists, or that it should be prioritized over all others. It is revertive and does not recognize that colonialism interfered with/halted the progression of social development in favor of colonial domination because it cannot distinguish the continuation of those progressions from colonial influence.

A couple of you stated you expected better from her, but I did not. I was aware of Saeed’s sexism years ago when she dismissed issues of women’s rights in the Muslim community when they were too “extreme” for her, such as women leading mixed-gender prayer. Subsequently, her ableism came as no surprise to me. Sana Saeed, who is unfamiliar with my anti-colonialist work but contributes intricate theories regarding it, has always prioritized only certain types of Islamophobia. She does not view gendered Islamophobia within the Muslim community as a type of Islamophobia (unless it has to do with hijabs probably), but rather as tradition in what she vaguely describes as “what Islam really is” versus “when Islam stops to look like Islam.” It is easy to see then why she wouldn’t view ableism as a form of Islamophobia against disabled Muslims.

This is a not-so-random reminder that disabled Muslims exist, and that the Prophet was one of them. These comments are fascinating to me considering so many of these individuals claim to love the Prophet. I don’t openly clarify my position, and this would be why. This kind of holier-than-thou-while-I-lowkey-insult-who-the-Prophet-was type behavior is so bizarre to me and completely turns me off. It is common for Muslims to deny that the Prophet was disabled, because after encounters with Christian colonizers, the Prophet was depicted as having been possessed by demons. Instead of addressing the true evil of this accusation (the disgusting Islamophobia and ableism), Muslims downplayed the fact that he had seizures and was not accessible during Revelations, claiming it could not be epilepsy. Maybe it wasn’t. In this context, the diagnosis itself is not so important as the Revelation-caused seizures by which society would render him disabled. What we as an ummah should have said is that it is truly appalling to discredit the Qur’an because of this prejudice. But we didn’t, and we don’t. We erase the disability instead.

A disability is created when society is not built for a specific type of ability, i.e. like if we lived in a society where everything was built for people with wheelchairs, or if the lights turned off when you needed them because you were the only one who wasn’t. You’d be disabled. A friend and I have been discussing whether or not the seizures constitute a disability because of how the episodes were regarded/accommodated in his community as an expectation, but it would certainly qualify as one were it anyone else. This is why it’s so particularly aggravating when the people pretending to defend him use this kind of ableist language. It is for the Prophet to believe whether they truly love him. He would believe it, because he was kind. He was also disabled, and orphaned, and illiterate, and I cannot understand why these characteristics don’t soften the hearts of those who rage, supposedly on his behalf, by using them to insult disabled Muslims.

[Edit] Some have messaged me to ask whether I am disabled myself i.e. whether Jonathan AC Brown, who is clearly still in his feelings about me calling him out for “objectively” defending rapist Tariq Ramadan to whom he is incidentally related, was being ableist against me. I am not disabled in any shape or form, at least temporarily. Abled people cannot face disabelism, so he was not being ableist against me. Just against a large portion of Muslims, including the Prophet.