I haven’t done this in forever, but it’s that time of month again. Which means–nail polish! (Here is an explanation. Basically, according to mainstream interpretation nail polish creates a barrier to the nail for the cleansing ritual before prayer, so Muslim women tend to only wear it when they are not obligated to pray–during menstruation, which has developed a reputation of impurity. Sometimes Muslim women are asked why they are wearing it [“Do you want everyone to know you’re menstruating?!”] as though menstruation is shameful, to which I say LOOK AT MY NAILS THEY ARE SO PRETTY!)

I decided to try metallics this week, and began with a rose gold color named “Penny Talk.” 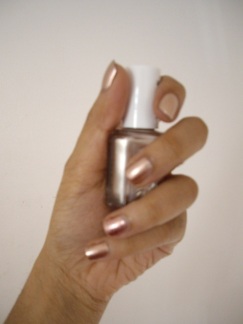 I don’t think I much like the foil-y look, but I do like sparkles and (though you can’t tell in the picture) I applied a top of coat of them on the nail of the ring finger, from a little bottle of Essie labeled “A Cut Above.” 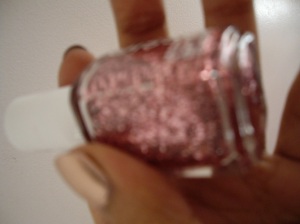 There you have it. I’m not much a nail polish kind of person (I don’t miss it when I’m not menstruating like I would miss, say, red lipstick–thank God I can wear red lipstick whenever I want) and so far I only have 2 colors that I really actually love seeing on my nails. (Not these.) So I might do a nail polish giveaway some time after the lingerie one, since it is like a thing about this website.