Almost two years ago, I (finally) visited a chiropractor. “Good news,” he said. “Your back pain isn’t spinal. It’s muscular. You’re 25; WHY are you so tense?”

“Average citizens are advised to save water when the enormous agricultural industry consumes 70% of the world’s freshwater and wastes it on excessive irrigation and crops unsuitable for the environment.”

“So have you considered exercise?”

He wanted to see me twice a week. I would not go, because my copay was $60, and I was not going to pay that twice a week. I saw him twice more and disappeared, and when his office called, three times to get me back on track, I said my schedule had shifted to unpredictability.

“That’s why you have back pain.”

“For… having a curved waist?”

“I’m going to align your hips.”

I suppose if I wanted, I could sleep on the floor; that always fixed it for about 24 hours, but truthfully I did not want to eye the underside of my bed. There’s a universe down there. The chiropractor had assigned excersizes, some of which were incidentally yoga positions, but I did not dedicate time to them either, anymore than I dedicated time to glazing myself in body oil every night in response to my incredibly dry skin.

“Look how glossy my hair is even though it’s dry,” I said.

“Nahida!” She grabbed my shoulders. “Nahida are you under the impression that just because you’re pretty you don’t have to take care of yourself?!”

She sank her face into my dashboard.

“Do you know how much work it is to massage oil into your whole body?” I demanded.

“Get someone to do it for you. I’ll volunteer.”

I laughed at this.

This amazement toward my body and its failings (I am being overdramatic of course) was still all before snagging my helix on a hairbrush. Behold my pierced cartilage: 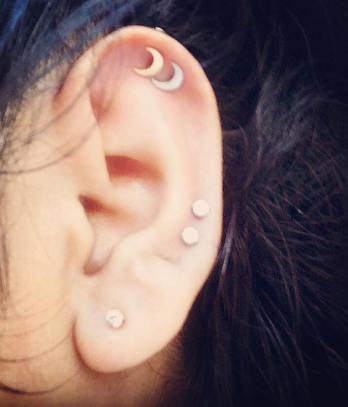 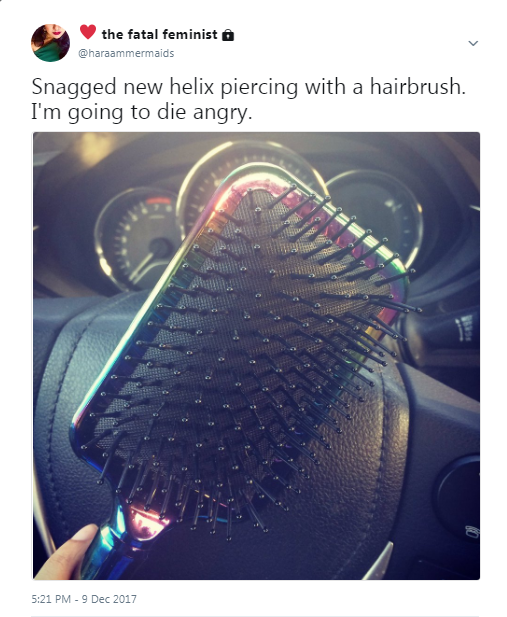 This incident was highly unlikely because of how infrequently I brushed my hair. My mother has many an instance of chasing me around the house attempting to comb my hair. (“How is it somehow always still in place?” a classmate had once complained.) So I am extra angry about this. As a result of the snagging, the uppermost piercing isn’t healing properly, even though the remaining three are very healthy. Around the top cartilage piercing, I have granulation tissue–the new connective tissue that should form at the base of the wound–forming around the earring. It is very baby soft. And it needs to be shrunk back down to staying inside the wound where it belongs. (“Did I comb my piercing inside out?” I speculated in amazement.) If saline soaks and tea tree oil fail to accomplish the task, the earring–and I can feel my heart breaking in my mouth as I think of this–will need to be taken out.

It was just once, I thought helplessly. I only snagged it once. (It was pretty bad though, the way the bristles had moved into the piercing and dug with the motion; I was not at all surprised that they had sort of turned it inside out.) My body was usually so good at healing itself.

“I haven’t had time to work on that. I’ve been very busy. Did you know there’s a planet where it rains diamonds? Diamonds are so overpriced.”

It was a problem I could not bother think about. (Why was my body betraying me?)

“At least you’re 4-dimensional,” I said quietly into my knees.