When I was very little, I attended Quranic classes at the mosque with other small children. On one occasion, I stood lined up for prayer while the instructor lectured on prayer etiquette. It was midsummer in California. The heat was almost unbearable. My hair was uncovered, but I was wearing a sweater, and I felt dizzy. I knew what I needed to do: remove the sweater. But I couldn’t, because I recognized that when I lifted it over my head, it would pull the shirt I wore beneath it up along with it part way, which is what sometimes happens with six-year-old children. And I couldn’t have everyone see that. And I was too shy to ask to leave the prayer area; if I asked to leave for the restroom now (where no one would see me), I thought, the instructor would admonish me for poor planning. So, standing there in the boiling festering heat gathering beneath the sweater until I saw blue and purple, refusing to remove it, what did I do?

The last thing I remembered as I was falling to my knees is the otherwise austere instructor looking at my face with the softest, most concerned expression I had ever seen on his. “Nahida? Nahida? What is happening?! Nahida!” And then everything went dark.

I woke up with my head on a pillow, still in the prayer area. The other children were gone. Someone had removed the sweater. My mother was beside me. I sat up and began to cry.

She was having none of that. “Nahida, what on earth? Stop it. Now tell me what happened.”

“Okay. Well why didn’t you take off the sweater?”

I knew why I hadn’t; I could not, however, find the words to explain it to her.

She frowned. “Nahida, you are not that young of a child. You can take off your own sweater.”

Well of course I had had the ability! My eyes welled up again. I was in a foul mood. “I want to go home.”

“She was burning up,” explained my instructor. “After she fainted. It was like she had a fever of over a hundred. It was raging.”

It is summer in California again. The heat has returned.

“Hell is hotter,” lectures the man without hi’jab.

I am not a modest woman.

At least, not in what is accepted as the traditional sense. Whether or not what is broadly conventional is really “traditional” is highly suspect, as the Encyclopedia of Islam and the Muslim World states, “The term hijab or veil is not used in the Qur’an to refer to an article of clothing for women or men, rather it refers to a spatial curtain that divides or provides privacy. The Qur’an instructs the male believers (Muslims) to talk to wives of Prophet Muhammad (S.A.W) behind a hijab. This hijab was the responsibility of the men and not the wives of Prophet Muhammad (S.A.W). However, in later Muslim societies this instruction, specific to the wives of Prophet Muhammad (S.A.W), was generalized, leading to the segregation of the Muslim men and women.” But in every sense of the word that is widely accepted by the contemporary Islamic community, I am not a modest woman. While I do prefer longer sleeves and habitually wear flowing skirts, and even considering what I cover merely in terms of surface area being more conservative than the average woman in my society, what I wear is nearly always form-fitting. And to boot, I look men straight in the eye.

Tell the believing men
that they shall subdue their gaze
(and not stare at the women),
to maintain their chastity.
This is purer for them.
God is fully Cognizant
of everything they do.
And tell the believing women
to subdue their gaze, and to be mindful
of their chastity, and not to show off
parts of their adornment [in public] beyond
what may [decently] be apparent
or obvious thereof;
hence, let them draw their covers
over their bosoms. (Qur’an 24:30—31)

I look everyone straight in the eye. Granted, I don’t interpret “subdue their gaze” as meaning “don’t make eye contact” and I think it’s ridiculous that it has been interpreted as such. Understandable—even admirable (when it isn’t enforced solely on women while men look directly and steadily on contrary to the very first part of the verse, that is)—but ridiculous. I’ve been told, as other women have also reported in the comment section they’ve been told, that my gaze is too intense as to be suggestive. This does not happen only when I am intently paying attention. It happens even when I’m merely daydreaming. And when used to police women’s bodies and behaviors, this is an alarming, thoroughly disturbing indication that anything can and will be exploited to justify severe, intolerable restrictions of women’s freedoms. As xcwn writes, these regulations “reinforced the idea that men’s gaze at women (provided that it had the veneer of religiosity) was in fact God’s gaze. That the men ranting on about women’s supposed immodesty were somehow reflecting how God saw us. They claimed as much.” And it is yet another example of patriarchy existing in direct conflict with God, attempting to displace God with its own power structure which it claims is a replicate of Divine Ordinance. From a historical perspective, and the perspective of the Qur’an itself, nothing has been a greater enemy to Islam than patriarchy. Patriarchy is organized shirk. It is the very infusion of redefining terms of liberation and empowerment into viciously twisted devices of imprisonment to male interpretation of womanhood and circumscribing a structure of worship in place of the one directed by God.

Those who harass believing
men and believing women
without their having done wrong,
bear (on themselves) a calumny
and a grievous sin.
O Prophet! Enjoin your wives,
your daughters, as well as other
believing women that they should
cast their outer garments
over their persons (when abroad):
That is most convenient,
that they may be distinguished
and not be annoyed. […] (Qur’an 33:58–59)

In many translations “annoyed” is translated as “harassed” (also correct in a particular understanding) prompting the modern interpreter to conclude that women are Islamically held responsible for thwarting harassment, disregarding both the context in which the lines themselves are embedded and in which the verses were revealed; the very first lines blame the harassers, not the harassed, and the purpose of this revelation was to visually distinguish the Prophet’s wives so that others acted appropriately toward them: as the perpetual hostesses to an unremitting routine of visitors seeking the Prophet’s advice, they were continuously given little privacy or rest.

My immodesty is not related to passing out at the age of six, though the incident was a demonstration of how harmful slut-shaming, body-policing attitudes toward women are, to the point at which even young children would choose to faint rather than endure it. I know for a fact I would have preferred form-fitted clothing if the event had never transpired. I like slitted skirts because I think they are attractive. And I wear them. I even wear them to look attractive, to smile when I pass by a mirror. I love them because I love beauty, and because it was once Islamic to love beauty, as Seyyed Hossein Nasr notes in Traditional Islam in the Modern World (via Afshan), “Traditional Islamic civilization is marked by its emphasize [sic] upon beauty being wedded to every aspect of human life, from the chanting of the Quran to the making of pots and pans. The traditional Islamic ambience, both the plastic and the sonoral, have always been beautiful, for traditional Islam sees beauty as a complement of the Truth.”

A’isha bint Talha defiantly proclaimed, “God the Almighty distinguished me by my beauty, and not to keep me hidden from sight! I want everyone to see this, and acknowledge my superiority over them. I will not veil. No one can force me to do anything.”

I love hair flowers and hi’jab pins and the “camel hump” and other decorative ornaments that make hi’jab “immodest” and “invalidate” the purpose. And if it distracts, you dear brother—

You will lower your fucking gaze.

I hope you are all enjoying the summer. I’ve seized the opportunity to wear decorative hats with blasphemously large white flowers 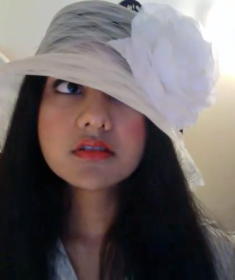 and begin to feel leisurely at the heat, lashes lowered sleepily and all. 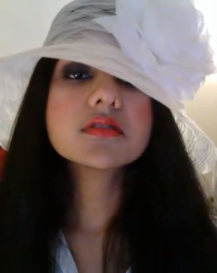 I can still subdue my gaze in them, as purpose of a sun hat is to shield one’s eyes. No one can complain the look in my eyes is too intensive.