Me: There are white converts on this thread who think we will prioritize them over black Muslims. 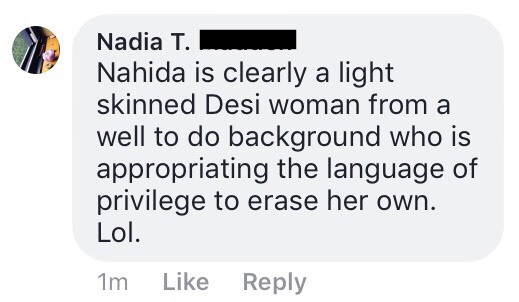 I busted out laughing at this so hard because that’s exactly the image I project online yet I’m somehow surprised when that’s what people gather.

My mother worked in an assembly line and raised us alone. But what’s even more absolutely more crucial–are you listening? this is crucial–is that it doesn’t matter how terrible I am at applying my makeup, because Nadia still won’t see the line where my foundation hits my real skin tone.

😂 In all seriousness, I am not mentioning my economic background to detract from privilege, but for the transparency of the fact, so affected parties are able to draw conclusions. I did go to college.

This is the first time I’ve ever been described as light skinned, but that is likely because my level of comparison was the white standards against which I was critiqued and I might be lighter than most people of color.

It’s a bizarre and out-of-place choice to to make this remark in the context we were discussing, in which I had pointed out that a white woman had just made the choice to ignore anti-blackness in favor of rambling on about “reverse racism,” but it falls in line with the trend of people using intersectionality incorrectly.

I still want to make it my biography because of how much it makes me laugh.

She ended up deleting the comment. I have no idea why.

One thought on “How do I make this the biography in every book I publish?”